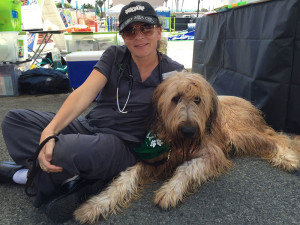 Dr. Charlotte Frank is the owner and Medical Director of Paws 4 Shots and more. Born and raised just outside of London, England her family emigrated to San Diego when she was a child. She graduated University of California, San Diego – Revelle College in 2000 with a BS in Biology. She then attended the School of Veterinary Medicine – University of California, Davis and graduated in 2004. Dr. Frank completed a year long internship in emergency, surgery, and internal medicine at VCA Emergency Animal Hospital and Referral Center in San Diego. Dr Frank has worked in both emergency medicine and general practice. She also worked for Vetco at Petco’s vaccination clinics for a number of years before developing Paws 4 Shots and more.

You will find Dr. Frank alongside her terrific team members at the majority of vaccination clinics and dog events that we attend. She believes that “shot clinics” can still offer clients A+ care in a low cost setting and strives to make Paws 4 Shots and more your one stop for preventative care.

Charlotte is married to a veterinarian and has three little girls. She lives in Murrieta with her family, which includes Hannah, an elderly Pit Bull/Chow mix, DeeDee, a golden Retriever with a multitude of health problems, Zoe the wonder cat (14 years old and fighting cancer like a champ), Wally AKA Goblin the not so wonder cat, and two guinea pigs, Flower and Jewelry (named by the kids, of course!).

When she isn’t working to make Paws 4 Shots and more THE BEST low cost vaccination clinic in Southern California, she enjoys spending time with her family (especially day trips to Disneyland), great food and even better wine, exercise, and most importantly, vacations with her husband and girls!

Dr. Andrew Trempe graduated from Whittier College in 1998 with a BA in Biology. He then attended the School of Veterinary Medicine – University of California, Davis and graduated in 2002. Dr. Trempe completed an internship in emergency, surgery and internal medicine at VCA Emergency Animal Hospital and Referral Center in San Diego where he has worked as an attending emergency/critical care clinician ever since. Dr. Trempe has also worked for Vetco at Petco’s vaccination clinics for a number of years.

Dr. Trempe enjoys the “change of pace” Paws 4 Shots and more gives him from life as an ER/critical care veterinarian.

Dr. Trempe is married with three little girls and a house full of animals (mostly all female!). When he isn’t saving lives at the VCA Emergency Animal Hospital and Referral Center, he enjoys spending time with his little girls, watching sports and dominating in his fantasy leagues, craft beer, and vacations with his family. Dr. Trempe is also an avid runner. He competed in cross country in both high school and college and has completed a number of half marathons.

We carry the following prescription medications and more at competitive prices: